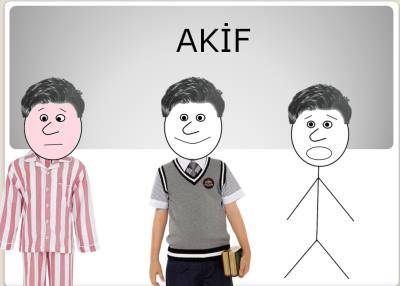 Akif is a student. Normally he gets up at 7:00 am. Then he goes to school at 7:30 am. But yesterday he got up at 9:00 am because he was ill. He didn’t go to school. He had breakfast. Then he wanted to watch TV but his mother was angry with him. She said, “Go to bed, idiot, you must have a rest!”. Akif understood her and went to bed. When he got up, it was getting dark. He got confused. He thought it was the morning but it was the evening. He put on his school uniform. He went to the kitchen. His mother wasn’t there (she had gone shopping). He thought she was sleeping. He ate some bread and cheese and went to school. When he got to school, it was 7:30 pm but Akif thought it was 7:30 am. He was surprised because there weren’t any students in the school. The door of the school was closed and locked. He was more surprised when he realized that it was getting darker, not lighter. (www.bebekce.gen.tr) While thinking of what to do, he met his classmate Harun, who was passing by. Akif saw that he wasn’t wearing school uniform.

Akif said, “Hi, Harun. Where is everybody? Why aren’t you wearing uniform? The teachers will be angry with you.”

Harun said, “ Akif, what are you doing in your uniform? Why are you here in the evening? Are you crazy?”

Then, Akif understood. He had mistaken the evening for the morning. He went back home quickly. His mother met him at the door. “Where have you been?” she said.  “I am sorry mother. I thought it was the morning though it is the evening.” he said. Then they had dinner, and Akif went to bed again.

#2 What time does Akif normally go to school?

#3 What time did Akif get up yesterday?

#4 Why did Akif get up later than usual yesterday?

#5 Why was Akif’s mother angry with him when he wanted to watch TV?

#6 Why did Akif go to school yesterday evening?

#7 Where was Akif’s mother when he got up?

#8 What time was Akif at school yesterday?

#9 Why were there no students at school? 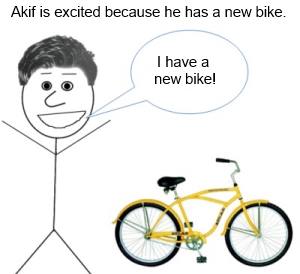