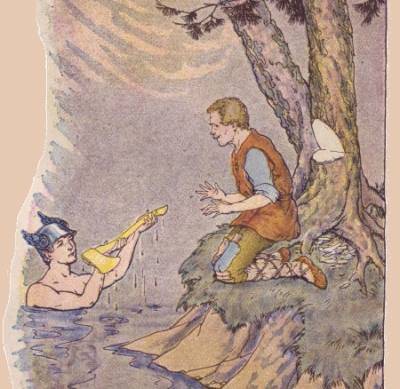 A woodman was cutting a tree beside a river. Suddenly his axe flew out of his hands and fell into the water. While he was standing by the river and crying for his loss, Mercury appeared and asked, “Why are you so sad? What is the problem?”. The woodman told him what happened. Mercury pitied him and dived into the water. Then he brought a golden axe out of water and asked, “Is this your axe?”. The woodman said that it wasn’t his axe. Then Mercury dived again and this time he brought a silver axe and asked, “Is this your axe?”. The woodman said it wasn’t. Once more Mercury dived into the water and this time he brought the woodman’s axe. The woodman was very happy to find his axe and he thanked Mercury. The latter was very pleased with the woodman’s honesty and he made him a present of the golden and the silver axes. When the woodman told his friends the story, one of them envied him and decided to try his luck with Mercury. So he went to the riverside and began cutting a tree and let his axe fall into the water. That was a trick, of course. Mercury appeared again and wanted to help him too. He dived and brought a golden axe. The man immediately jumped and said “That is mine, that is mine!” Mercury was disgusted with his dishonesty. So, he didn’t give the man the golden axe. Nor did he give him his real axe. (=So, he lost his own axe, too)
Honesty is the best policy.

#1 What was the woodman doing beside the river?

#2 What happened to the woodman’s axe?

#3 Why did Mercury want to help the woodman?

#4 How many axes did Mercury bring to the woodman?

#6 Why did Mercury give the woodman three axes?

#7 Why did the woodman’s friend go to the river?

#8 Why was Mercury angry with the woodman’s friend? 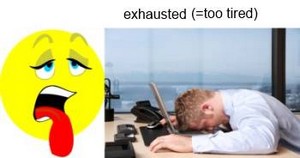